AGBSs Gabriel Rossouw dominated the sixth round of the SA simF3 Series held in the dunes of Zandvoort, teammate Gert James secured second position in both races.

H-J eSports’ Gerrit Crafford started Race 1 from third position and looked to challenge James until the half-way stage when an off track excursion put pay to any further advances. 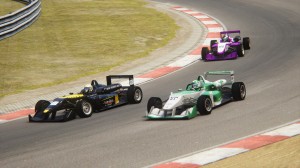 The exciting Race 2 battle for fourth position between Holden-Jones, Bryson and McGeer.

Race 2 was defined by the frantic battle between H-J eSports Jason Holden-Jones, debutant BNX SimSports’ Boyd Bryson and M2 Racing’s Mike McGeer. Lap 3 saw Bryson close the gap to Holden-Jones to reveal a significant setup difference between the cars. Holden-Jones was using a low down force setup, allowing him good straight line performance, in contrast to Bryson’s superior high speed corner capabilities. This made for a thrilling 12 lap fight which ultimately saw them both passed by McGeer before race end.

The next round of the SA simF3 Series will be at Zandvoort on Monday evening 01 August 2016. If you would like to join the championship please email Jason at jason@simracesa.co.za

Drivers’ Championship Standings after Round 6:

Teams’ Championship Standings after Round 6: