A dramatic and surprise end to Round 2 of the 2016 SA simGT Series at Silverstone saw Gabriel Rossouw cross the finish line ahead of Trigon Racing teammate Peter van Vuuren to claim victory of the 41-lap endurance race.

The race started off with both AGBS Nissan GTRs of Gert James and Boyd Bryson leading the way, however not able to pull away from the Audi R8s of Ichor Racing’s Lance Garassino and Revlimit Racing’s Jason Absmeier. A thrilling battle ensued, consisting of multiple attacking and defensive moves. The four cars so close together that after Garassino had to abandon a move on Bryson into The Arena, Absmeier was positioned perfectly to pounce on Garassino through Turn 7. Just a few laps later Absmeier made the same move on Bryson, however the following corner resulted in both Bryson and Absmeier pointing in the wrong direction at Brooklands.

AGBS fighting to maintain the race lead ahead of Revlimit Racing and Ichor Racing.

After the Absmeier/Bryson incident, James suddenly found himself with a healthy gap back to Garassino and third placed man Absmeier, however the gap would quickly diminish to see both Garassino and Absmeier challenge him for the lead on lap 11. An inevitable attempt by Garassino on James, at The Arena, resulted in contact and a out-of position James was left scrambling for air between himself and Absmeier, the two would unfortunately end up pirouetting at the exit of Turn 5 to allow Garassino a significant lead on lap 13.

“Following the two AGBS Nissans` around was very interesting indeed. Jason Absmeier managed to get passed and later had an incident with Boyd which gave me the opportunity to reel in Gert. After summing him up for a few laps I found myself in a situation to get passed Gert, approaching Turn 3 I was much better on the brakes which allowed me to come up along him. Some will say that it was far too aggressive, but I feel that it was perfectly fair, in the turn we had the slightest of touches when trying to maybe close the door but it was too late, if it was a major bump I would have waited but felt it was a fair pass and went through, I also gave lots of space going into Turn 4 to allow him to come back and race a little but he unfortunately had a wrestle with Absmeier”, says Garassino 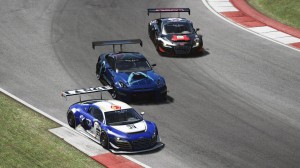 Lap 13 saw an impressive scramble for the race lead.

It was not over as Absmeier began a stunning recovery drive to close the gap to Garassino and execute a clever strategy while doing so. As the half way stage of the race approached, Absmeier was the first of the front runners to pit, a move that would see him in clear air during his in-lap and out-lap and more importantly on a fresh set of tyres sooner than any of his direct race lead competitors. The plan worked as when Garassino pitted just one lap later, Absmeier snatched the race lead before Garassino could rejoin the track. Garassino fought back and challenged Absmeier for the race lead, the two drivers left no holds barred, all this while the Trigon Racing Nissan GTRs quietly went on about their race and keeping in contact with the front runners.

With just two laps remaining and after Absmeier had just retaken the race lead, Garassino ran wide on the exit of Turn 5 onto the slippery part of the circuit losing control and clipping Absmeier in the process. While Absmeier and Garassino desperately tried to rejoin the track, Rossouw swooped by to claim the race lead. van Vuuren and GhostworX racing’s Markus Steyn too passed the ailing former race leading pair. Unfortunately Absmeier decided to retire from race citing terminal damage to his Audi.

Rossouw held position all the way to the end to claim his maiden SA simGT victory, together with van Vuuren, to make it a surprise Trigon Racing 1-2. The ever consistent Steyn scored an impressive podium result. 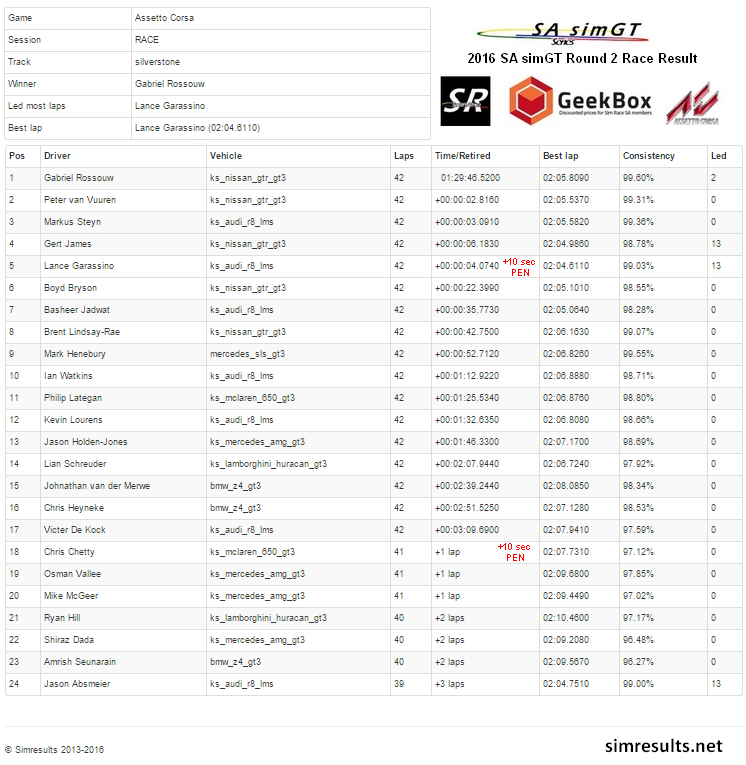 Drivers’ Championship Standings after Round 2:

Teams’ Championship Standings after Round 2