AGBS’s new signing, Gabriel Rossouw made it a dominant double victory of the 2016 SA simF3 Series opening round at Paul Ricard.

Henebury leads McGeer during race one

The start to race one saw no change in the order, except for a spin from RC Fanatix’s Shiraz Dada which saw both The Real McCoy DP’s Ian Watkins and M2 Racing’s Amrish Seunarain move up to seventh and eigth positions respectively.

The second pass of the race came from Watkins who, on lap three, managed a better drive onto the second part of the Mistral Straight to pass RC Fanatix’s Osman Vallee before Signes (turn five).

From lap seven, two interesting battles demanded attention. H-J eSports Jason Holden-Jones was beginning to close the gap to AGBS’s Gert James, and HRT’s Mark Henebury was piling the pressure on F3-AM class leader The Real McCoy DP’s Clifford Needell. After an exciting collection of chess-like attacking and defensive moves from both James and Holden-Jones (race video timestamp 31:24), Holden-Jones finally was finally able to make a pass stick exiting the Chicane (turn two) on the very last lap of the race. Needell was able to maintain position ahead of Henebury to the end.

Rossouw won race one nine seconds ahead of the Holden-Jones/James battle.

As a result after contact between Holden-Jones and James saw them drop down to fifth and ninth positions, the start to race two saw a major shuffle in the order to see Henebury up to second position and leading an ever tightening three car train. Aided by the action behind him, Rossouw was able to develop a significant gap back to the rest of the field by lap three.

McGeer recovering after contact with Watkins during race two.

Lap six saw Holden-Jones slip passed a Henebury avoiding Needell at Tour (turn nine). Later on lap 10 and after another exciting exchange of moves, Holden-Jones eventually made his way passed a spinning Henebury at the Chicane.

A hard fought opening seven lap battle for fifth position between McGeer and Watkins came to an end when they spun each other around at Verriere (turn one).

Rossouw was left unchallenged to make it a double victory for the day. James executed an exciting recovery drive from ninth to see him finish on the podium, just 0.2 of second behind Holden-Jones. In the F3-AM class, Needell comfortably won both races. 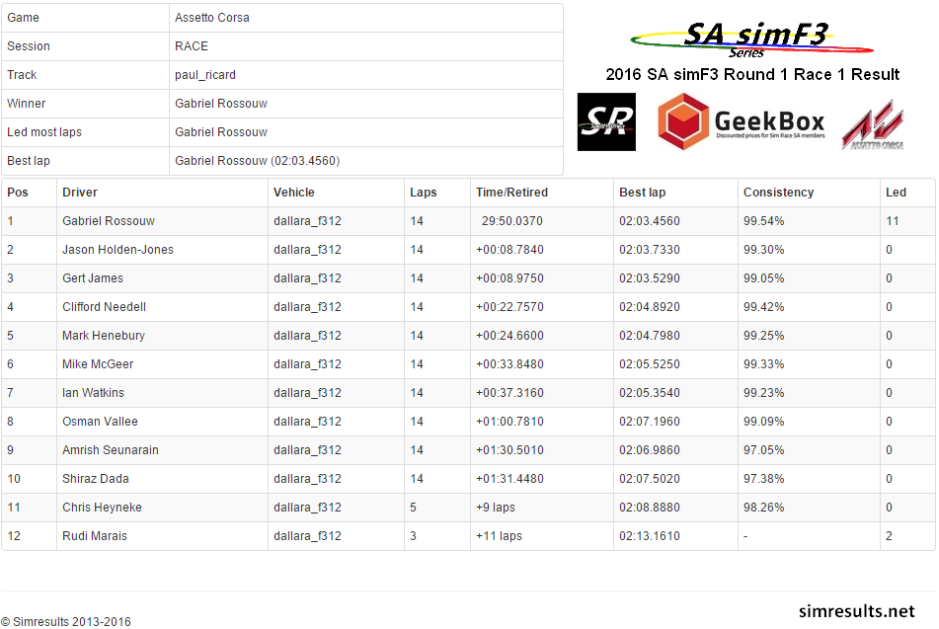