Squadro Ghostworx’s Basheer Jadwat won the tenth round of the 2015.2 SA simGT Series, held at the Nordschleife, by crossing the finishing line some 24 seconds ahead of nearest championship rival Boyd Bryson (AGBS).

The practice sessions leading up to qualifying hinted at a possible BMW pole position and it was the BMW of Basheer Jadwat that started from the front of the field. Jadwat started the race well and was fortunate to have HRT’s Mark Henebury hassling Bryson for second position throughout the opening lap.

Towards the end of the first slap an exciting battle for fourth position developed between the GT-AM Class leader Gabriel Rossouw, Chris Browne and Markus Styen. The BMWs of Browne and Steyn clearly coped better through the corners, however Rossouw’s GTR made up the difference down the straights of the great circuit. The three drivers  all moved up a position after Henebury made  an error at Turn 3 dropping him down to sixth and out of contention for a race victory.  Earlier on Bryson’s AGBS teammate, Gert James, was unfortunate to end up beached on a curb to see him recover from the pit-lane in 18th position. 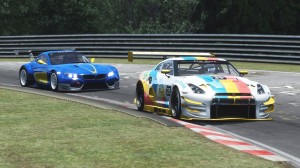 The battle for the last podium position between Rossouw and Browne.

Chris Heyneke started the race from the pit-lane, with a delay, to find his way past eight drivers to finish in a very respectable 10th position. Heyneke enjoyed a battle of pit-stop strategies with Jason Holden-Jones. Heyneke opted for a one stop strategy while Holden-Jones a two-stopper. The battle was decided when Heyneke found his way passed Holden-Jones on the very last lap of the race.

The penultimate round of the championship will be at Zandvoort on Monday 21 September 2015.

Drivers’ Championship Standings after Round 10:

Team’s Championship Standings after Round 10: