It took eight class wins and one more appearance on the podium for Mike McGeer to secure his title as the Sim Race South Africa hosted 2015.2 Clubmans simM2 Cup Drivers’ Champion. The final round of the championship took place at Zandvoort on 20 August 2015.

McGeer faced stiff competition from the likes of Gert James, Brent Lindsay-Rae and Ian Watkins. James and Watkins were the only other drivers to secure class victories during the season. 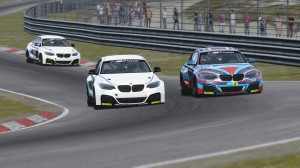 James passes Watkins during the final round at Zandvoort.

The simM2 Cup made use of a double race sprint round format as well as Assetto Corsa’s impressive BMW M235i Racing car.

Details of the next Assetto Corsa Clubmans championship will be released within the week. If you would like to enter the next Clubmans Championship please do not hesitate to email Jason at simracesa@gmail.com.