Basheer Jadwat dominated Round 7 of the SA simGT Series at Eastern Creek to see him not only win both races but to also reduce the Drivers’ Championship deficit to a meager nine points behind leader and Round 7 absentee Boyd Bryson. 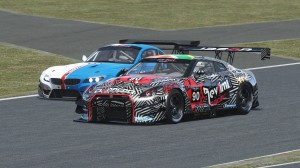 Absmeier executes a move on Steyn for second position.

Jadwat started race one from pole position to consistently edge away from the rest of the field. Jason Absmeier displayed impressive pace, on a track not suited to the strengths of the Nissan GTR, to challenge and finally pass Markus Steyn for second position.

An incident at Turn 11 saw both Gert James and Philip Lategan fall back positions to see James recover to challenge Mike McGeer for tenth position. McGeer did well to fend off James under braking for Turn 2 however later he would loose that position to James at Turn 4.

With the field mostly spread out during the half way stage of the race the battle to watch was between Steve Smith and Jason Holden-Jones for 12th position. The two cars swopped position on a number of occasions to see Holden-Jones finally cross the line ahead of Smith. 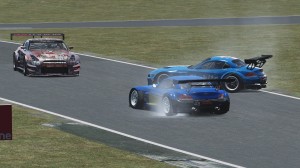 Coetsee picks his way past the spinning BMWs to move into second position during race 2.

The opening laps saw the Squadro GhostworX BMWs leading 1-2 followed closely by Rebel GhostworX’s Johannes Coetsee and Kinell Racing’s Chris Browne. An unusual braking point for Steyn concertinaed the cars behind to end in disaster to see Steyn spin together with Browne. Jacques de Villiers did very well to avoid the chaos to move up three positions into third position behind teammate Coetsee.

A maiden podium for de Villiers in Race 2 meant a double victory in the GT-AM Class.

The remainder of the race was all about the battle for fourth. Gert James had snuck past the spinning BMWs to see them later claw their way back and wanting a way past. Browne was the first to attempt a move however contact with James meant retirement from the race. Steyn did however find a way past after James went wide at Turn 15.

Chris Heyneke finally found his way past Mike McGeer after a race long battle between the two Nissan GTRs. Jacques de Villiers finished on the final step of the podium, his best result of the season, to also make it a double victory for the day in the GT-AM Class