Absmeier timed the start to perfection to pass pole starter Gert James (#102 AGBS Nissan) around the racing line under braking for the opening corner. On lap 2, Peter van Vuuren (#15 Trigon Racing Nissan) ran alongside Peet du Toit (#24 Raging Bull Motorsports Mercedes-Benz) down the main straight only to abandon the move and fall back into the clutches of Chris Browne (#48 Kinell Racing BMW). Browne taking advantage of the battle ahead used a superior drive out of The Old Hairpin to eventually pass van Vuuren under braking for McLean’s (turn 7), for ninth position.

Jadwat, Bryson and du Toit three wide on the approach to Coppices.

After an incident which saw both, race one’s winner, Jonathan Mogotsi (#80 Raging Bull Motorsports Mercedes-Benz) and Basheer Jadwat (#83 Squadro GhostworX BMW) off the track after The Esses, James suddenly found himself in second position and with eight laps remaining closing the gap to race leader Absmeier.

In what arguably was the biggest fight of the race, Jordan Sherratt (#07 Revlimit Racing) and Philip Lategan (#14 Prodigy Motorsport Mclaren) exchanged positions on multiple occasions to see it eventually going Lategan’s way at the end to net him a fourth position finish.

Towards the closing stages of the race, a frantic four-way battle for tenth position broke out. The hard fought Jason Holden-Jones (#22 H-J Motorsport Lotus) / du Toit battle for eighth position resulted in a traffic jam behind them. At one stage three cars entered Coppice side by side, and one could argue if it was not for du Toit, who wisely braked early when he did, the result would have ended in contact between the cars. 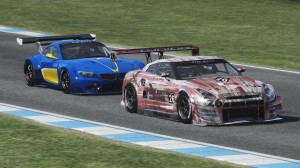 Absmeier managed the gap to James to limit it to three seconds, enough to earn him his first victory of the season. Mogotsi crossed the line to secure the last remaining podium position and the Drivers’championship lead. 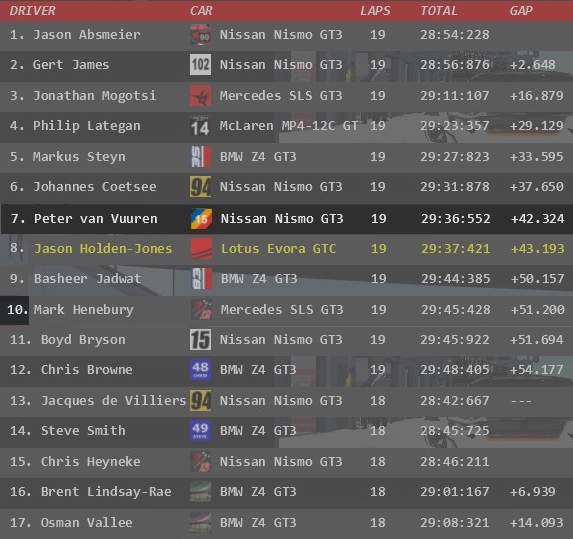 Driver Championship Standings after Round 1:

Team Championship Standings after Round 1: