Heyneke Racing Team (HRT) have launched their 2015.2 SA simGT Series car and driver line-up, the first team to do so for the new season starting on 08 June 2015 at Donington Park.

The team have have decided to split their programme by moving away from the BMW Z4 GT3 to use two different cars. Heyneke will pilot the freshly homologated Nissan GTR GT3 (#13) and newly crowned SA simSS3 Drivers Champion Mark Henebury will pilot a Mercedes-Benz AMG SLS GT3 (#12). After completing their rookie seasons, both drivers will compete in the Pro Class.

“We have done good pre-season testing with the Nissan and Mercedes. Mark prefers the Mercedes above the other cars as it suits his driving style better and he is able to do better times than in the Z4. I found the Nissan better suited to my aggressive driving style and I am also on the same pace as the Z4 with less seat time in the Nissan.” said Heyneke

“We are taking a gamble changing from the Z4 as I am sure the current track data gained during our first season in GT racing would have been valuable for season two, but we will practice hard before races and get the setups spot on.”

Heyneke hard at work testing the Nissan GTR GT3 at the Nürburgring.

The cars will also run a different livery to last season’s yellow, black, purple and blue colour scheme. The team have opted for a dark grey with red accents for this season.  “The new liveries represent the official logo and colours for team Heyneke Racing Team moving forward.”

“Season two is always going to be tough for a new team as the other teams will have taken notice of us by now  and know we will not be push overs and with me winning the AM Class in my rookie season, they will now know HRT means business. We are setting to win the Team’s title this season with consistant fast driving. As for individual Championship, Mark and I are aiming for a top three drivers championship finish. There are some very fast drivers and its going to be a very tough season. Team work and communication is vital that we make the right decisions during crucial times. A great example of that is the last SS3 season. Mark won the Championship by one point and this could not have happened if we did not make the right decisions during races earlier in the season.”

“We love the new race formats. It will make for full grids and close racing with one mistake sending you to the back of the pack and out of good points.”

Team HRT wish all the teams best of luck for this season and lets leave it all on the track, and a big thank you to Sim Race South Africa for this opportunity and all the hard work by Jason Holden Jones behind the scenes to make this all possible, thank you” 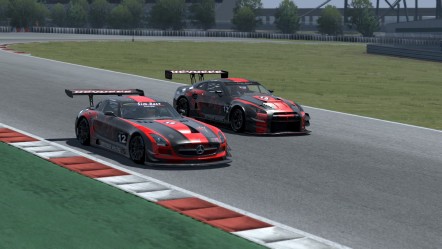 Interested parties are welcome to fill out the team application form found HERE.

The 2015.2 SA simGT Series will be delayed broadcasted on Sim Race South Africa’s Youtube Channel. Subscribe now to watch all of the action.