Liebenberg enjoyed a good start from pole position to see him lead the field into La Source (turn one). HRT’s Chris Heyneke had a blinder of a start to progress from 7th on the grid to trade paint with Basheer Jadwat (Squadro GhostworX) for second, trading position on entry to Eau Rouge and then later at Les Combes. Marius van Wyk (Deltec Racing Team) too had a productive start to see him in fourth position by the end of the opening lap.

Jonathan Bentz (Squadro GhostworX) pulled off an impressive move to pass van Wyk around the racing line at Turn 11. 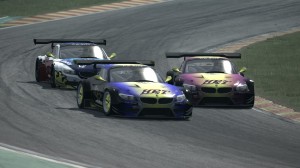 Heyneke swiftly lets teammate Henebury through while fending off Bentz.

Then on lap four, after off track excursions by both Squadro GhostworX cars, both HRT’s were enjoying second and third position. In a daring move Heyneke managed to let teammate Henebury through while at the same time keeping Bentz behind him. Later after being let through by Bentz,  Jadwat passed Heyneke while navigating Blanchimont, only to fall back after a spin exiting Les Combes.

Liebenberg led flag to flag to claim his maiden win of the 2015.1 SA simGT Sprint Series.

“Again had a decent start to stay ahead going through Eau Rouge. I made some mistakes in the 1st lap which allowed Bash to close right up to me. After the nerves settled I could put some decent laps in, but Bash was still faster and I knew he would pass soon. But a small error from him gave me some breathing room. From there I braked a little earlier, trying to manage the braking oversteer. My lap times were still pretty good, and I crept away from 2nd place Chris every lap. Crossed the line in 1st! Whooooohoooo! My 1st win here on Simracesa, super stoked. Hope to be up front more often this year, that’s if Squadro and Shadow treat me nicely.

Well done Bash, Jono and Boyd for the other podiums” says Liebenberg

“Qualifying went brilliantly. Was very happy with my time and to be in the position I was. The race started and watching Boyd launch with his steering to the right and going into the wall left me giggling for the next couple of laps. Sorry Boyd but from my angle it was quite funny. So turn 1 comes and i’m not fully concentrating I touch Bentz into the first corner and I honestly thought I had knocked him out so I backed off a bit. Realising everyone was fine I went for it in full steam. Going through Eua Rouge Yasteel and Riaan make contact at high speed both going into the wall and coming across the track. I only just misssed Riaans car. With Markus in front I had to push to keep up. Marius Van Wyk was amoungst the drivers in the group with everyone doing very well! Lap 2 came and unfortunately Markus and Marius made contact through Campus corner allowing me to pass both of the drivers. From this I could now see Bentz, My teammate and Basheer in front. I was pushing the car as hard as I could to catch up. On lap 4 I was closing really fast when Bash had a incident at Les Combes which allowed me to pass and Bentz was right there. Bentz then goes pretty wide into the high speed Pouhon bend which allowed me to pass. Now both Ghostworx cars are behind Chris and myself. The excitement starts cause they were quicker but who was not going to make a mistake. Starting lap 5 I was realing in Chris pretty quickly with the Ghostworx car of Bentz right there. Chris did not want to hold me up and in a split second we decide to swop positions with Bentz literally right there barely any space. We pulled off a move that put me in front of Chris through the high speed Pouhon bend, one I cant believe worked so well. Chris did a good job keeping the pace but also holding back the Ghostworx cars. By the next lap both Bentz and Jadwat had passed Chris and it was time to really push. With Bentz getting closer lap by lap I was getting nervous. I tried everything I could but just did not have the grip. On the last lap I went wide into the gravel @ Campus corner and came onto the track in my opininon in the wrong way and Bentz went straight in to the back of me. I slowed down to compose the car and allowed Bentz to pass. I feel that was correct as I should never of come back into the racing line after slowing down so badly. Anyway I managed to finish 3rd Woohoo another podium. I was very happy and this was to date the best race i’ve been in.” says Henebury