Boyd Bryson (Xtreme Racing) lead flag to flag to secure his 2nd win of the season at Imola.

Pole positon starter Bryson executed an impressive to start to maintain his position into Traguardo (turn 1) and to immediately open up a gap back to 2nd placed man Basheer Jadwat (Squadro GhostworX). An unexpected pit-stop for Jadwat saw BMW driver’s Juan Liebenberg (Team Ryoku) and Chris Browne (GhostworX 3.0) move up to 2nd and 3rd positions respectively. 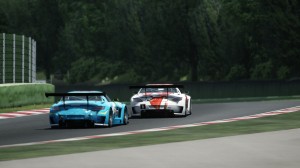 The Hunter/Haarhoff battle for 6th.

Ken Hunter (Xtreme Racing) and Quintin Haarhoff (Taurus Racing) displayed a good scrap for 6th position until the two made contact on the approach to Minerali which dropped Hunter down to 7th position.

Markus Steyn (Rebel GhostworX) did well to recover after an opening lap incident to pass both the Taurus Racing cars and advance to 5th position.

The hotly contested battle for 2nd between Liebenberg and Browne went on the entire race long, both drivers extremely well matched, however Browne was not able to get close enough for an attempted pass.

After the start Bryson was left unchallenged to secure a double win at Imola, with Liebenberg and Browne crossing the finish line to round out the podium.

Nazeem Edwards (Nexus Racing) enjoyed his best result of the season to finish in 4th.

“Much better start, hung onto the lead and once it had settled down and managed to pull out a decent gap. Brought it home for the double. Awesome. Just simply fantastic. Super chuffed, and thanks again Xtreme!” says Bryson

“Another good start saw me just fending off Markus and sticking with Juan, then Bash had some technical difficulties and I found myself in 3rd behind Juan – it seemed like he would pull away so I just concentrated on being smooth and started to close the gap, when I caught up I knew he was faster in a straight line so I just tried to apply as much pressure as possible to try and force an overshoot or a traction problem on corner exit from him but he was rock solid -the race went by so fast – I was sucked right into the experience. Thanks Juan, great race, you deserved the place.” says Browne

2 Comments on SAGT Round 6 Race 2: Bryson unchallenged for Imola double