The start saw a field reshuffle.

On lap 3 race leader Jadwat half spun at Traguardo, the Squadro GhostworX driver seemed to have unsettled the car while riding the rumble strips. 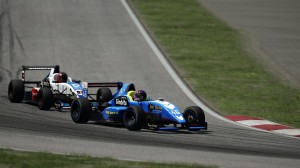 Jadwat’s spin dropped him down to 3rd behind Johannes Coetsee who was enjoying a strong race in the blue number 46 JVR GhostworX. Jadwat managed a good drive out of Rivazza 2 which enabled him to pass Coetsee down the main straight just 1 lap later.

By this stage Steyn was in a good position to win the race, however with 7 laps remaining he would have to out-pace a very quick Jadwat. Lap after lap Jadwat edged closer to Steyn until on the very final lap Jadwat was in a position to challenge for yet another win. Victory was still not decided before the 2nd to last corner when Steyn made a slight error running wide under braking for Rivazza which is all Jadwat needed to slip by and emerge from Rivazza in the lead and to cross the finish line to secure his 11th win of the season. Coetsee crossed the line to complete the podium.

Jadwat’s move was reminiscent of when Steven Pelser (Revlimit Racing) passed teammate Jason Absmeier to take victory of Round 2 Race 1 which was also at Imola. 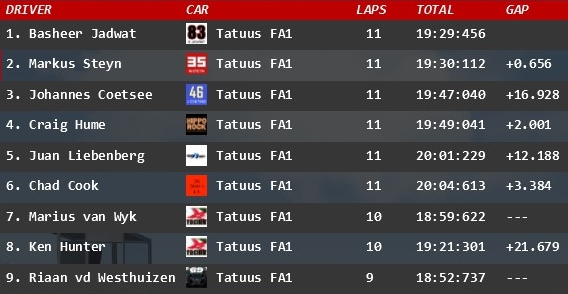