Denis Mitchell (SH Racing) won race 1 of the SS3 round at Imola.

The battle for 2nd between Absmeier and Jadwat.

A great start by Mitchell saw him out drag pole sitter Jason Absmeier (Revlimit Racing) into Traguardo (turn 1).  Mitchell was able to extend his lead when Absmeier was forced to defend from current championship leader Basheer Jadwat (Squadro Ghostworx). Jadwat was enjoying a better exit out of Minerali which in turn lap after lap would allow him to close up to Absmeier on the following straight and under braking for the Alta chicane. However Absmeier was stella through Rivazza 1 and 2 and a gap would seemingly effortlessly open back to Jadwat with each pass. It was a fascinating battle which Absmeier won out right.

Chris Browne (GhostworX 3.0) was unlucky to be clipped by Steven Pelser (Revlimit Racing) on the opening lap, the incident dropped Browne down from 5th to 12th. Browne immediately went on the offensive, passing Marius van Wyk (Xtreme Racing) and Craig Hume (Hippo Rock Racing) before the lap was completed.  Browne would go on to finish in 8th after a spin dropped him down from 6th position. 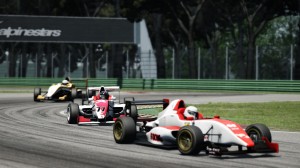 The Cook, van Wyk and Hume battle through the Alta chicane.

A hard fought 9th placed battle was had between Chad Cook (SH Racing),  Hume and van Wyk. The three drivers drove exceptionally well to avoid contact between them while at the same time gifting nothing to one another. Hume came out on top between the three to finish in 7th position.