A lightning start by Mitchell allowed him to beat pole sitter Basheer Jadwat (Squadro GhostworX) into Cimini Uno (turn 1). Jade Dafel (Nexus Racing) too got away well to challenge Jadwat for 2nd, unfortunate contact between the two cars forced Dafel wide to drop back to the back of the field.

Craig Hume (Hippo Rock Racing) profited from the opening lap shenanigans to move up to 4th after starting from 9th on the grid. Hume went on to enjoy  a race long battle with Chris Browne (GhostworX 3.0), Browne, after passing Hume using an outside line at  the tight Trincea corner, came on top to finish in 4th.

Mitchell was left unchallenged to take his 2nd win of the season. Jadwat and teammate Jonathan Bentz crossed the finish line to complete the podium.

“I think i got the start of starts! I got into gear as the lights changed with perfect revs and shot off the line! Pat on my back for that haha…then somehow managed to just pull away by around 0.5 a lap from Basheer with my only concern being fuel. I came home on fumes…i think i would not of made it to the next corner with what was left in the tank!” says Mitchell

“Initially the car seemed to struggle off the line.  But kicked butt as soon as it hooked 2nd gear.  Entered T1 (the kink thingy) 3 wide and was hoping the car would not slide out and take the field out.  Thankfully it sat and i could make up places. Entered T3 (or the first tight turn) in 4th with Chris right on my back.  The Merc definitely had the edge on the straights but i had Chris right with me at every turn.  Thankfully the top end edge meant i could just pull away enough to make Chris think twice about trying to pass.  Fortunately as well he is a clean and fair driver, so there would be no half moves.  Gave each other enough space and luckily i could kinda keep the car on track.  The car felt decent, but would misbehave on the odd occasion which put Chris side by side with me.  With a handful of laps to go i noticed my fuel was getting seriously low, and then also noticed my front right tyre was changing colour and that slight change in focus gave Chris the tiny gap he needed to pass.  Tried sticking with him, but just could not.  He was way quicker in the turns, and my top end would make it up on parts, but not enough to even think of a pass.  His tyres seemed to go off at the end and i could get closer, but not enough to safely attempt anything.
Excellent race and brilliant to do so many side by side laps with someone and not even have a touch.  Thanks Chris ” says Hume 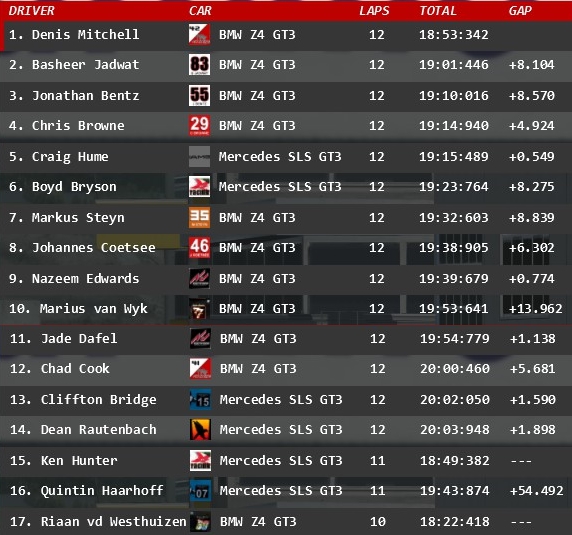 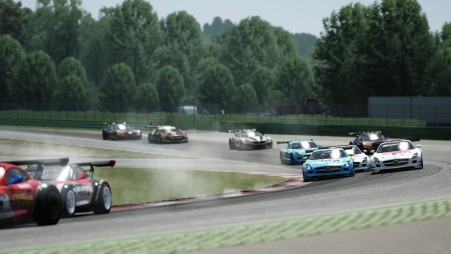