Jason Absmeier (Revlimit Racing) won Race 1 of Round 8 of the 2014 SA simSS3 Series at the Vallelunga circuit.

Denis Mitchell (SH Racing) started from pole position to maintain his lead past the opening stages. Championship leader Basheer Jadwat (Squadro GhostworX) had to relinquish his 2nd position when he ran wide on the run to Cimini (turn 1), the error allowed Absmeier into a battle for victory with Mitchell. The two locked horns in what must be one of the greatest contests of the season so far. Over 7 laps Absmeier edged towards Mitchell to use the slip stream effect down the long back straight to pull alongside Mitchell and finally  pass him under braking for Campegnano (turn 2).

The two Squadro GhostworX cars of Jadwat and Jonthan Bentz could only watch the battle for the lead from a distant 3rd and 4th position, the two GhostworX 3.0 cars following close behind.

Mitchell tried valiantly to take the fight back to Absmeier and he almost did so following a much better run into the tight Trincea corner, however it was not to be as Absmeier slowly pulled away to take his 2nd victory of the season.

“Jason seemed to either back off of conserve for a bit or i drove as good as my tires would allow…and i pulled a slight gap, then the dreaded lap 7 arrive! This was the magic tire wear number and as predicted i started loosing and Jason seemed to be getting stronger and stronger. Jason pulled a great move on me, i could not answer back…i was doing everything to hold stations! In the end a great race win for Jason and i managed a 2nd!” says Mitchell

“Got a killer start and already started hounding the guys ahead of me. And I watched as Bash got involved in some scraps and then ate some dirt much to his dismay. I had to take his position as he regrouped but I knew he’d be back as he had the pace on me… and then Steven ran wide into the long right and had a half spin which unfortunately resulted in him torpedoing me on my left side. Left with front, rear and side damage I was more than happy to keep my P4. After lap 6 or so I started catching Bash who was really sliding around and he graciously let me past. I made some inroads on Dennis and Jason but they were way too far ahead. Great results guys.” says Bentz
Race 1 results 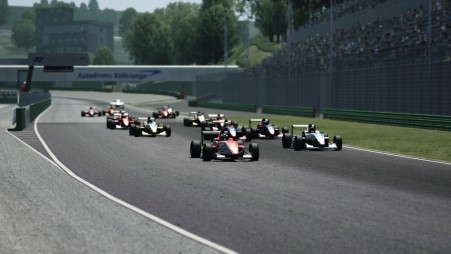 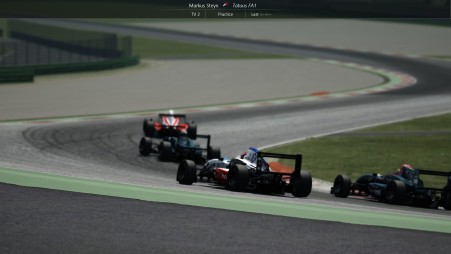