After soaking up opening lap pressure from Denis Mitchell (SH Racing), Basheer Jadwat (Squadro GhostworX) continued his fine form to win Race 1 of Round 7 of the 2014 SA simSS3 Series held at the legendary Monza circuit.

A freak accident for van Wyk saw him sky high.

During the opening lap Jonathan Bentz (Squadro GhostworX) found himself in the thick of the action. A lightning start saw him catapult from 5th place to enter Rettifillo (turn 1 chicane) in 3rd position. Steven Pelser (Revlimit Racing) used the slip stream effect on the long high speed Curva Grande to pass Bentz into Variante della Roggia (turn 3). Later on the same lap, and after heavy contact with Marius van Wyk (Xtreme Racing), Bentz was forced into retirement . The contact caused a scary accident which saw van Wyk’s car, after secondary contact with Yasteel Ragubeer (Team Ryoku), launched into a mid-air barrel roll.

A slight error by Pelser navigating the tricky combination of Curva del Vialone (turn 7) and Variante Ascari (turn 8) allowed Juan Liebenberg (Team Ryoku) to close up and pass him for 3rd position at Curve Parabolica (turn 9).

Lap 3 saw Jason Absmeier (Revlimit Racing) out-drag Johannes Coetsee (JVR GhostworX) into Rettifillo for 6th position, Absmeier gave the position back after out-braking himself exactly where he had passed Coetsee one lap before. Coetsee then returned the favour spinning at Curva di Lesmos (turn 4). 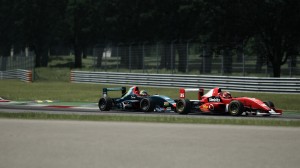 Fascinating battle to see Pelser come out on top.

A great duel for 4th had developed between Pelser and Steyn, the two drivers swopping positions on multiple occasions and in a most respectful manner. Further down the road Ken Hunter (Xtreme Racing) and Chad Cook (SH Racing) enjoyed a race long close quarters battle to finish just 2 seconds apart in 9th and 10th respectively.

The opening laps saw Jadwat, Mitchell and Liebenberg break away from the field to comfortably hold their positions to the end.

With the win in Race 1 Jadwat has extended his drivers championship lead to 37 points ahead of Absmeier.

“Got a pretty good start, avoided any collisions into T1. T2 I saw Chris lagging a bit then his car just jumped and shot off track, luckily I could avoid him. Got to the 2nd chicane, Steven and Jono was in a heated battle but unfortunately Jono lost out as he ran wide onto the dirt. I made a clean pass on Steven down the back straight to get into P3. From there I just put my head down and started to open a gap to P4, as I couldn’t match Denis and Bash’s times. So cross the line in a comfortable P3. So stoked!” said Liebenberg

“Got an appalling start, totally bogged down off the line. Going to turn 1 i found a car left and right of me, squeezing me till contact..from both sides!!! I had nowhere to go, and from that got damage and i think from then on that might of been a reason i struggled for pace…but still managed to hold off a hard charging Juan to get a 2nd. Well done to Bash, great race pace there.” said Mitchell

“Got a good start ahead of Denis who seemed to have bogged and I was able to pull a comfortable gap all the while exploring where I could push the car and where not to. Well done to Denis and Juan for the podiums.” said Jadwat 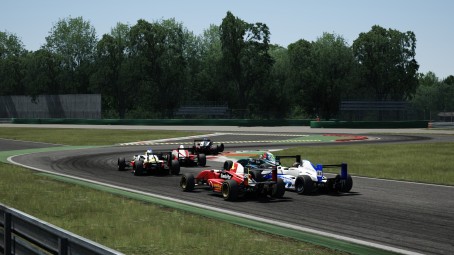 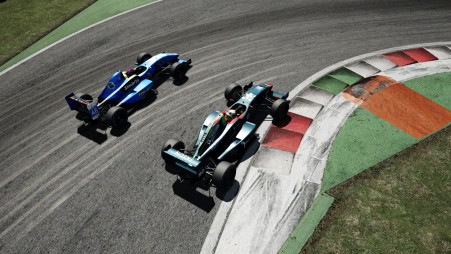