Mitchell started well from pole position but so too did Liebenberg who forced Mitchell to defend on the approach to San Donato (turn 1). Opening lap contact between Benjamin Wheeler (NAV Gaming) and Markus Steyn (GhostworX 3.0) caused the field to concertina further fueling the fight for advancement throughout the field.

Lap 2 saw a ragged Ken Hunter (Xtreme Racing) allow Basheer Jadwat (Sqaudro GhostworX) to creep up behind me, Hunter left the door open and then in dramatic fashion closed it resulting in both cars farming at the high speed Arrabbiata 1 right-hander.

Liebenberg, Jason Absmeier (Revlimit Racing), and Steyn conducted their drive through penalties which were awarded from incidents during Round 3 at the Magione circuit. Craig Hume (Hippo Rock Racing) too conducted a drive through after contact with Steven Pelser (Revlimit racing) during the opening lap.

After Liebenberg completed his 2nd and final drive through, he immediately set out after teammate Yasteel Ragubeer to pass him and newcomer Marius Van Wyk (Xtreme Racing) simultaneously while negotiating San Donato on lap 3.

Steyn and Absmeier proceeded to do battle, the two drivers exchanged moves until lap 6 when Absmeier passed Steyn around the outside at Bucine (final turn).

Jonathan Bentz (Squadro GhostworX) and Wheeler were gifted 3rd and 4th positions when on the final lap of the race Coetsee half-spun at Lorenzo (turn 5).

Jadwat drove a very impressive race starting from P15 to finish 2nd on the podium.

”I got an epic start passing a few cars into turn one and going side by side with Ken for a number of corners until Arabbiatta 1 when we made slight contact resulting in us both loosing some ground. Luckily we were able to rejoin without much time lost and set about it again. The drive through penalties served helped a ton. After this I put my head down and found some pace having decent scraps with Jonothan, Ben and then Johannes to finish a flattering 2nd. Totally unexpected. ” said Jadwat.

Mitchell’s victory could not come soon enough as the SH Racing driver has suffered a number of technical failures and racing incidents which have hindered far more favorable results.

”Finally got a decent start, not usually a strong point of mine as my car usually take a lap to get going, but I got the advantage from Juan into turn 1.  At the end of lap 1 some of the guys  took penalties from last week’s shenanigans and from then on managed to somehow slowly pull a big enough gap.” said Mitchell. 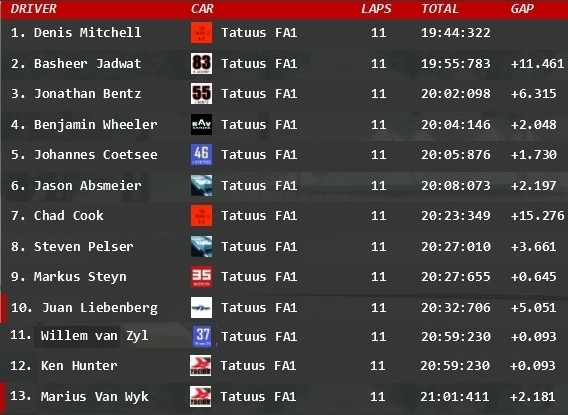